All Aboard the Hayley Welsh Fun Boat!

Well I was just nestling down in my basket about to tuck into a stack of new picture books when I was dazzled...dazzled by a golden light coming towards me, at first I thought I might have pegged it and was about to meet my maker when against the brilliant sunshine I made out the silhouette of a most beautiful creature heading straight for me...

It was none other than gorgeous stunner and owner of the best barnet in children's publishing Ms Hayley Welsh author and creator of This Way Up!
She was not empty handed she had clasped in her hand, a big bag of Greggs finest sausage rolls , so we hunkered down together with a copy of the book for an impromptu interview and a good old gossip. 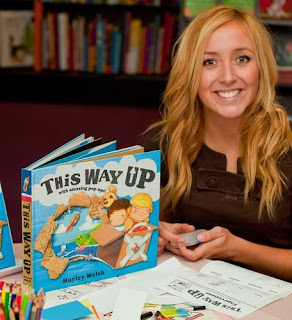 Introducing Hayley Welsh Creator of  This Way Up,

“Hello Hayley what a splendid honour to meet you (and you brought sausage rolls too - you are too kind!)”
“Hi Book Sniffer”
“We’re here today to find out more about your children’s book This Way Up Congratulations. Is this your first book for little people?
Yeah. This Way Up was a final end of year project at university, actually, and erm, I was working on it for a long time and a few months after graduating, it was picked up and published by Hodder Children's Books, so ‘Thank You Hodder!…"
They’ve done a lovely job. There are some pop-tacular pop-ups in there. So how did you end up working with Hodder?
It actually came about as a bit of a coincidence. I was doing an exhibition of my degree work in London, and was advertising in a local magazine called Lancashire Life. Luckily for me, Lancashire born and bred, Emma Layfield, who was actually the children’s book editor for Hodder, saw my article, after her mum showed it to her. So they got in touch with me that way. I’d already approached a few other publishers with the idea for This Way Up, and I’d had a bit of interest, so I was over the moon, when they contacted me
So tell our fellow sniffers a bit about This Way Up...
Well it’s a pop-up book, for under 5’s or for anyone who loves pop-up books (like me). The paper engineering is amazing, and was created by Corina Fletcher who worked on a lot of the Charlie and Lola books, so I was delighted to work with her.
This Way Up is all about the adventures that Poppy and Quinn have with a cardboard box and shows how far imagination can take you. 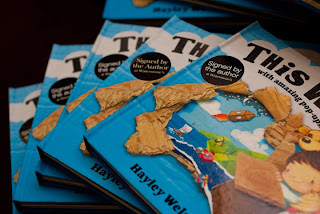 You’ve missed out one important character there. There is Poppy and Quinn but also a third character – their dog, who follows them on every page.
Oh yes, that is their little un-named dog.
Can I name him today? Can I call him ‘Book Sniffer’?
He can be called anything you like!… he’s one of those characters, which most people with a pet can relate to, so it can be your pets name, or anything.
Do you have any pets?
Yep. Well I used to have a golden Labrador called Roddy, named after Rod Stewart, who, looks wise, the dog in This Way Up is based on. But now I have a miniature Jack Russell, called Chip who actually got involved with some of the artwork. You can spot his paw prints on one of the pages.
So what was the inspiration for Poppy and Quinn?
Poppy and Quinn came quite naturally to me and they were created after drawing children at my local primary school. I visited for a few days there, gathering sketches of kids playing.  I always felt like I wanted 3 characters though, I think it was because as I child, there would always be 3 of us, my two cousins, Carley, Andrew, and myself. I have fond memories of my childhood with Carley and Andrew, so 3 characters felt comfortable. And I guess looking back the characters kind of mirror us as a group.
And how about the dog?
The dog is almost a reflection of myself. Whilst my cousins would run ahead, I would always be the one to trip up or hurt myself. I could never climb the tree quite as high as them, and would be watching them have fun from the bottom. The dog in the story is just the same. He’s stuck in the bubble outside the rocket I the space scene, he is scared in the plane when Quinn is driving, and is terrified of the dragon. He seems at his happiest safe inside the submarine or  in a den. He’s big scaredy cat and is even the one who tears the box to pieces at the end of the story.
So where did the concept of the box come about?
It came quite naturally. I spent a while looking at what children do and thinking back to childhood memories. I remembered playing with boxes a lot when I was younger and thought that this may lend itself to a theme.
I was also inspired by Oliver Jeffers, who in ‘The Incredible Book Eating Boy’, used his theme as a canvas for his illustration, painting on books throughout the story.
Cardboard was important as I could have a story about a cardboard box and also illustrate it on cardboard.
I really enjoyed painting onto cardboard too. I like painting onto found objects or something other than a white piece of paper.
Sometimes I find it quite intimidating having the pristine white page staring back at me. I like distressed of rough surfaces; there’s less pressure about making a mistake, and the odd tea stain or tear can lead itself to other things sometimes and inspire the creative direction of the illustration.
So what can our keen band of Book Sniffers expect from  Poppy and Quinn next?
I am working on a few new book ideas for them at the moment, which is great fun. I have a blog hayleywelsh.blogspot.com, where you can check out my latest sketches and book ideas.
You can also keep up to date with Poppy and Quinn’s next adventures on their blog, (PoppyandQuinn.comhttp://poppyandquinn.com/) where you can see Poppy and Quinn visiting Australia and the Arctic and get involved with crafty competitions and games. You can also chat to Poppy and Quinn on there too. They’re always up for a gossip and love meeting new people.”
Thank you for stopping by Hayley!  The Book Sniffer looks forward to sharing a sausage roll with you again very soon!
NB - Some of the photos here were taken by Hayley's very clever boyfriend
Posted by Pure Pirate at 08:00