Picture Books That Changed The World - Number 4: THE TIGER WHO CAME TO TEA by Judith Kerr 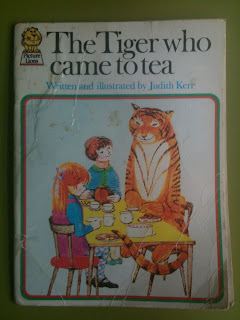 Welcome back  to my dusty archive of vintage treasures Book Sniffers...
.
I've had many a delightful author / illustrator pop by for tea at Chez Book Sniffer  some have impeccable manners (James Mayhew) ..some don't David Melling / Chris "chimps tea party" Mould...Egyptian cotton napkins ARE NOT to be used as second rate magic trick props!)

Now you know me, I don’t scare too easily (Apart from that episode of Dr Who set in a dolls house) but I have to admit, a large tiger knocking at the door might just shake me right out of my moleskin slippers and cravat


‘The Tiger Who Came To Tea’ was written AND illustrated (there goes that winning formula ) by the ever so charming Judith Kerr and published in 1968 (looong before I was a twinkle in Mother Pugs eye!).
Following a trip to the zoo with her young daughter, Judith told this fanciful tale to her own children over and over again before finally putting it down on paper for other children to enjoy.
The Tiger Who Came to Tea soon became one of the best-selling children’s books of all time.

Sophie and her mother are sitting down to tea when the doorbell rings. Now I certainly don’t take too kindly to being interrupted whilst I’m seated in front of the silver bowl.


No matter who Sophie and her mum might have expected they certainly didn’t imagine they would be confronted by a large, furry, stripe wearing tiger who promptly parks his stripey bottom at the dining table. 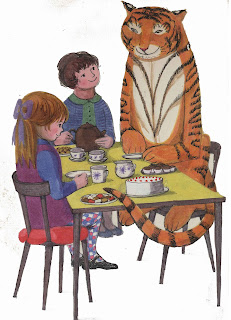 Anyway, to cut a short story even shorter, the tiger eats the sandwiches AND the buns AND the cake. He drinks all there is to drink including the tea in the teapot and eventually, every drop of water from the tap, causing, among other issues, serious bath time problems. 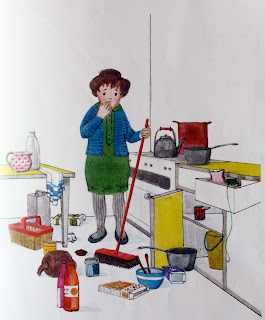 But that aside, this particular tale has been enjoyed by millions of children and adults alike for every one of its forty three years (That's VERY OLD!) in publication and is still worth shouting about after all this time.


Now can you imagine what other additional delights accompany this book as it travels headlong into the modern age, a  Facebook page, A stage adaptation (with show tunes if you please) A perhaps the cherry on the cake which didn't get scoffed by the tiger, at the magnificent Seven Stories Children’s BooksCentre in the wonderful city of Newcastle you can see the actual artwork from the book. 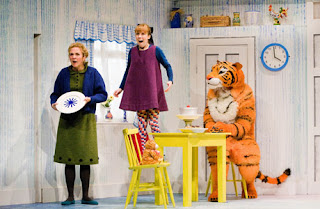 Judith Kerr donated her archive to the organisation in 2008.
Follow the link to find out all about the Judith Kerr archive at Seven Stories 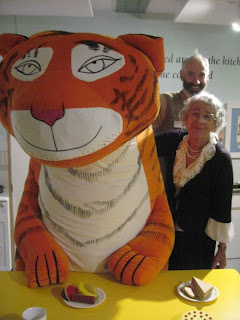 What more could you want from this most prestigious of Tiger Tales? It is indeed a story to lap up, if you haven’t already!
The Tiger Who Came to Tea - Published by Puffin - Illustrations (c) Judith Kerr
Posted by Pure Pirate at 01:16 No comments: 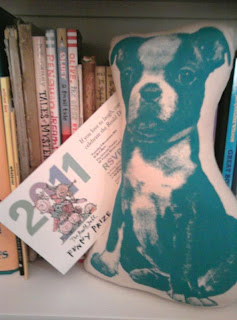 Talk about a bloomin Golden Ticket! look where the Sniffer is off to today! Only the blinkin' bloomin Roald Dahl Funny Prize! I can hardly contain my excitement. One has been lucky enough to gate crash the awards on a few occasions namely one memorable year where I accompanied the delightfully giggly Sam Lloyd - unfortunately to pay my way I had to carry I giant stuffed Mr Pusskins around town (including a brief trip to a tapas bar in Borough Market...which I think he enjoyed) But she won the prize with Mr Pusskins Best In Show - one of the best books featuring stick insect I have ever read !

Today there are some stonkers on the list, by rights I really ought not have a fave but truth be told I do - It's Leigh Hodgkinson's Limelight Larry - There you have it, my cards are on the table! 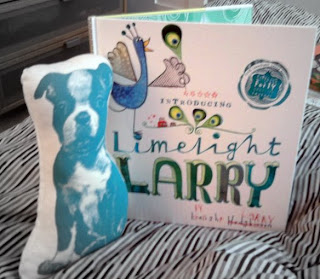 Click HERE for Larry's take on things! (this is far more important obv!)

Here I am on the train into Laaandaaaan ...(Not first class..GASP!) 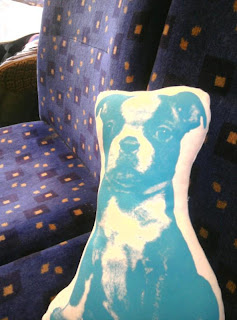 The winners were Peter Bently (younger catagory) and Liz Pichon (Older catagory) Worthy winners - everyone on the list had created fabulous humorous creations which will get thousands and thousands of little people into reading and that's what counts. 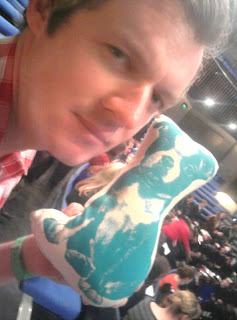 I was joined at the ceremony by author Giles Paley-Phillips ( author of The Fearsome Beastie) , glad to say he was very well behaved and joined me for sausage and chips at the after party! (here we are waiting for Michael Rosen to start proceedings)


Books about crafty cat pirates and a cheeky schoolboy win the Roald Dahl Funny Prize 2011!
www.booktrust.org.uk
A rhyming picture book about pirate cats has seized the bounty for the funniest book for children aged six and under in this year’s Roald Dahl Funny Prize. Cats Ahoy! is written by Peter Bently (who was also shortlisted in 2009 for the Roald Dahl Funny Prize), and illustrated by Jim Field. It is joined on the podium by The Brilliant World of Tom Gates, the winner of the seven to fourteen category, and the first in a series of books about Tom, an expert doodler and master of excuses, written and illustrated by Liz Pichon.


Felicity Dahl comments on the Prize:
‘My husband, Roald Dahl, often said with regard to books for young people, "it's got to be funny!”. Although he often wrote about children faced with the most dire circumstances, and triumphing over them, there was always a strong vein of humour in his writing. Giving children a giggle and making them smile remains as important as ever. That's why I'm so delighted that the Funny Prize, now in its fourth year, exists to celebrate the work of contemporary authors and illustrators who continue to honour Roald's mantra that "it's got to be funny!”.’
There must be something in the sea air as both Peter and Liz are coastal residents; Peter lives in Totnes in Devon, which he credits as the inspiration for Cats Ahoy! and Liz lives in Brighton, a veritable hub of funny writing talent, also being home to previous Roald Dahl Funny Prize winners, Sam Lloyd and Louise Rennison.

Michael Rosen, Chair of Judges, comments on the winning books:
‘The real beauty of these books is not only the deep down in your belly, shoulder shaking laughter that the words induce, but the expertly crafted interactive relationship they have with the VERY funny illustrations. These two books are master classes in how to write and how to draw funny.’ 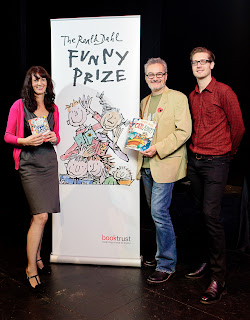 Michael on Cats Ahoy! by Peter Bently, illustrated by Jim Field (Macmillan Children’s Books):
‘Cats marauding as ghost pirates to steal fishy bounty from lily-livered humans: what more do you want from a funny book? Jim Field’s illustrations of the cunning pirate cats and Peter Bently’s majestic rhyming words had the judges in fits of giggles, most notably Grace, who also snorted on five separate occasions. Apparently she likes cats.’
Michael on The Brilliant World of Tom Gates by Liz Pichon (Scholastic):
‘Tom means to do his homework but is easily distracted, mostly by thinking up ways to annoy his sister Delia, get tickets to ‘the best band in the whole world’ Dude3 and to attract the attention of the class clever-clogs and Tom’s love interest Amy Porter. This book is a must for anyone who doodles, likes to wind up their sibling, has a serious caramel wafer habit and enjoys having their chuckle muscles exercised. That will be most people then.’
Viv Bird, Booktrust CEO, comments:
‘Although only in its fourth year, the Roald Dahl Funny Prize is already established as a highlight of the literature prizes calendar. In recent evaluations of Booked Up, our free books programme for Year 7s in England, 70% of pupils stated that funny books were their favourite type of book. This finding demonstrates something that we have seen time and time again at Booktrust: that humour in writing and illustration has great appeal to children and can help them discover a love of books. Booktrust is grateful for the continued support of Roald Dahl’s literary estate for this important award. ‘
The 2011 Roald Dahl Funny Prize shortlists were: 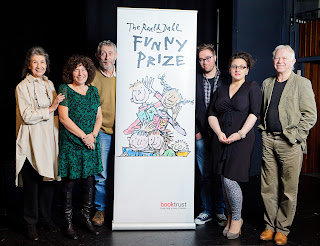 All in all a fabulous day! One of the best awards in town - long may it continue! THREE CHEERS FOR BOOK TRUST!  hip hip hooray hip hip hooray HIP HIP HOOOORAY! TOOT!