Hello fellow Sniffers, come in out of that blustery gale and make yourself comfortable, the kettle is on and I have arranged a fair tower of Choco Leibnizt on a fancy plate for us to share as we delve once more, into my trusty collection of classic picture books.

Never one to have been accused of making a mountain out of a mole hill / hamming it up OR be a drama queen about anything.. well not often I implore your to revisit the retro -wonderment that is our old favourite Not Now Bernard by our good friend David McKee. 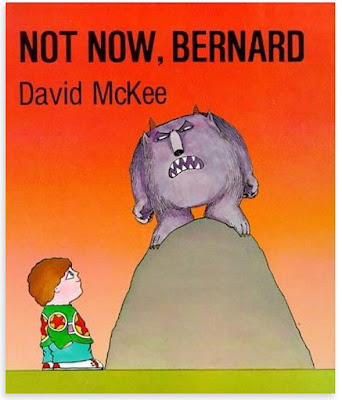 David McKee has many an impressive plume in his creative hat, amongst others he created the ever so patch worky Elmer the Elephant, Mr Benn, King Rollo and many other incredible and memorable characters. Not Now Bernard was first published in 1980 ( a fairly long time ago) and as with all my favourites, it is still in print and still ever popular. McKee was born scone in mouth in Devon, England in 1935. He received a degree from Plymouth College of art, a second degree from Hornsey College of Art, and became a freelance painter and illustrator. His career began with commissions for cartoons for newspapers and notably for the satirical Punch magazine. Eventually, and thankfully, I might add – (for the publishing world is a better place with him in it) - he moved into books for children and began what has become a life long career as a storyteller.

In this simple poignant text, Bernard meets a monster in the garden that is keen to swallow him up but when he explains the rather awkward predicament to his parents, they are far too busy to take any interest in what is going on. And so the monster’s rampage goes unnoticed. He eats Bernard, swallows his dinner, trashes his room and even takes up Bernard's place in the house, settling comfortably into bed. Bernard’s parents continue to go about their daily tasks and fail to take notice of their son (or his disappearance). An important life lesson to many a little blighter in not crying wolf. 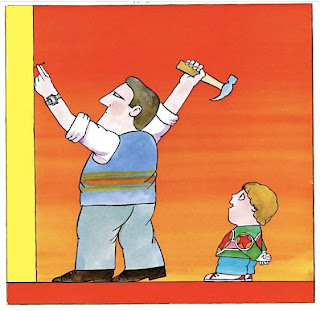 This retro and yet altogether timeless classic is both a delightfully amusing picture book about a ravenous, child eating, menace wielding, monster and a poignant piece of work that highlights the chinks in the armour of parenthood .

FOOT NOTE: Here is a picture of a copy of Not Now Bernard owned by Mr Chris Mould.. Eaten by his puppy.. because it's so good! 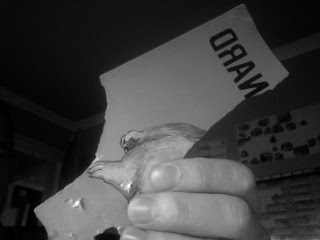