Before I wake Up ... A guest post by Britta Teckentrup

This book has always been a project very close to my heart.
It has been with me for more than 4 years…
I think that the first images and ideas for it developed in 2012.

The book was called ‘The Girl in The Woods’ back then.
Here is an image of one the first images of the book. 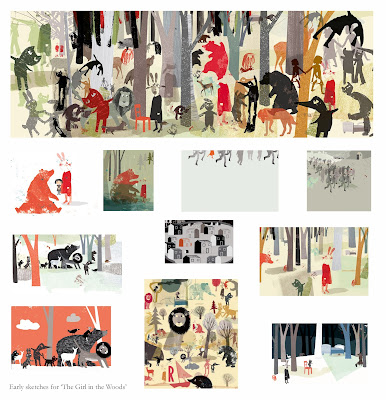 The girl looked quite different back then and I had a different take on the story.
It was the story of a little girl that lived deep in the woods.
The girl in my story embraced that special place inside of her…
That place where all creativity is born and where the imagination can run wild …
That place that can get lost along the way so easily…
That place that feels like home.

Here is a little extract of my original text:

“…There once was a girl who was wild and fierce.
She lived deep in the woods and her heart was full
of wonder.
She had a bed under the stars and could talk to all animals.
She would ride on the back of the lion, fly with the birds
and play chase with the rabbits …
She was fearless and didn’t have a worry in the world…”

When the little girl is taken to the big city and is expected to become like everybody else, her colours are beginning to fade and the book turns grey. But there is still a tiny trace of yellow inside of her…
There are other children living in the city that still have a trace of colour left inside of them…Blue, Yellow, Orange, Red… all the colours of the rainbow…
When they all find each other, the book’s finale is a glorious animal parade with all of the children riding out of the city on the backs of their lions, bears, birds and all the beasts you can imagine … back into their beloved wood.
(I still quite like this original idea but I never managed to get it just right but writing about it now makes me want to look at it again…)

I continued to develop the book in a slightly different direction and called it ‘My World’.
I felt that the text I had written was somehow interfering with the images and decided to use no text at all apart from the following introduction on a completely black page:

Out of the blackness a magical world appears until the book ends with the ‘narrator’ opening his/her eyes.
Here are some images: 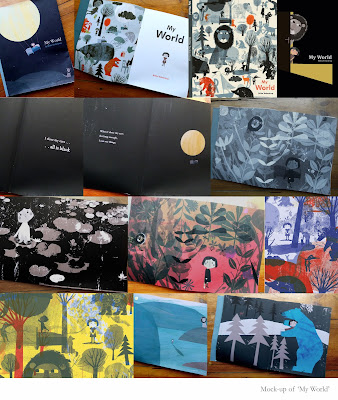 I chose a very large format for this version of the book to allow the reader to immerse himself completely in the images.
But it all became quite abstract and maybe a little too difficult for children?
It was also not very easy to sell.
But I still really like this version and it took me a very long time to let go.

After almost a year the final version of ‘Before I Wake Up’ started to emerge.
I decided that I had to go back to using text but instead of using a lyrical text I chose to write short poems….and it all seemed to fall into place.
The poems were quite random at first but the outline of a story…well more of a journey … emerged.
I decided against a ‘proper’ storyline and just added the framework of the little girl falling asleep and waking up. I wanted the book to feel like a real dream with no beginning and no end.
Suddenly and quite unexpectedly the book started to work on many different levels and it all clicked together and made sense.
My original idea and concept is still there but is now hidden underneath the layers of the dream.

A big thank you for giving me the opportunity to write about the making of ‘Before I Wake Up’. 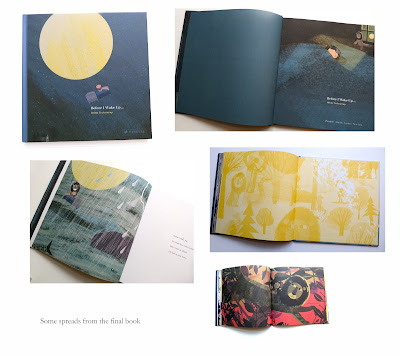