I have recently been introduced to the multitudinous talents of Mr Adam Stower Who is represented by all round smashers Arena Illustration Who only look after the creme De la creme of illustrators! 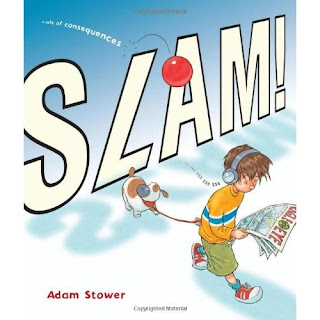 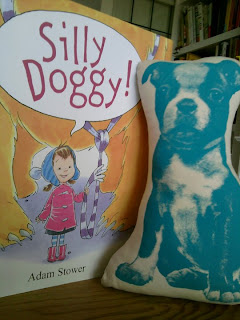 Mouse the cat laughed at the title so much she almost fell off her cushion but I was willing to give this story the benefit of the doubt ..not being a "silly doggy" myself!...
Adam has a unique talent for creating pictures which look like they are taken from a film with clever camera angles to create perspective and give the characters more impact on the page. As with SLAM! the text in this picture book is minimalistic to perfection! ...The real story is told through the pictures which your little pups will delight in discovering what's really going on.

Little Lily who is sweet as a cake with a cherry on top without being sickly discovers what she thinks is probably a VERY large dog in her garden - Naturally as you would Lily decides to adopt said "Silly Doggy" as her own and off the trot happily together whiling away the hours as mayhem unfolds around them. Silly Doggy turns out not to be the Doggy Lily thought he was and instead it becomes apparent that Doggy is in fact a very big galumphing bear who happens to have gone missing from the zoo...Lily realises the error of her ways and most reluctantly hands him back to his keepers. *imagine theme song from The Littlest Hobo*  Before Lily has a moment to grieve the loss of her darling big old doggy bear than she discovers an equally adorable replacement pet in her garden...But as you might expect "kitty" is not all she appears to be! ...

Absolutely and utterly deeeelish! This is a must read - and certainly worth a sniff and a re-sniff!

Thanks to Jayne at Templar Publishing for sending us a copy to sniff! (and having it signed too!)*SWOON!* 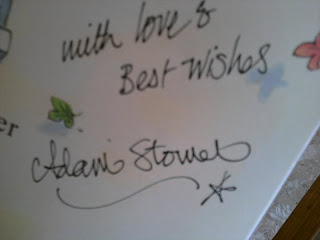