The "D" for Delightful David Melling is quickly fired out of the quick fire cannon! BOOM

No sooner had I unpacked my tea pot than there was a rat-a-tat-tat at the door of Le Chateaux Sniffer, My very first official guest at the new pad! (NB James Mayhew has popped round a few times to see if I'd unpacked the biscuit tin yet!) but *GASP* what a delightful surprise - twas none other than the ever so dashing David Melling (clutching a small bag of Garibaldi biscuits

David is an old friend and creator of some most sniffalicous picture books, including The Kiss That Missed, The Scallywags, and one of my absolute faves - Hugless Douglas!

(amongst many many other gems natch!) 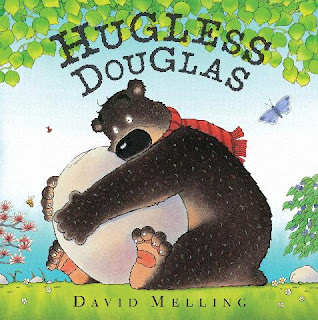 You can see more of David's sketches here on the Book Sniffer Facebook Page (David sends in a new doodle almost EVERY Friday - he is a super star!)  You can also visit his website to find out more about his work.

I put the kettle on tout sweet and we sat down for a natter - David has been bonkers busy touring and finishing his brand new book with Hiawyn Oram called The Totally Terrifying Three (publishing in the autumn) and looks smashing! 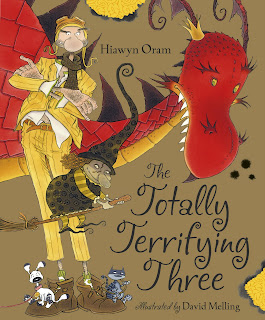 I think David appreciated having 5 minutes to put his feet up!
so after a few slurps of tea it was time to fire David out of the Book Sniffer Quick Fire Cannon!
Here goes ...
3....2....1..BOOM!
Describe your style in three words.
Humorous, Quirky, Character.
Do you have a number one tip for budding illustrators?
Work hard. Publishing is a slow business but if you put in the hours chances will come your way. The trick is to recognize those chances and, when they do come, to make the most of them.
Ebooks Vs Real Books?
Not surprisingly I prefer real books, the whole tactile element of them. But Ebooks are not going away so I shouldn’t feel as uneasy as I do right now. They will, no doubt, find their niche but I’m sure they won’t replace the real thing.
Your most overly used phrase…
My back hurts!
What’s in the near future?
Umm, a cup of tea (the kettle’s boiling).
Another Cup of Tea?
Ha! Beat me to it – yes please, milk no sugar.
Who are your fave authors and illustrators at the moment?
Sooo many, but right now that’ll be William Heath Robinson, Bill Watterson (Calvin and Hobbes – does that count?), Derek Landy (Skulduggery Pleasant), and Chris Mould (a friend and the creator of the Something Wickedly Weird series).
What’s your inspiration?
My kids – they remind me of my childhood days, and some of the conversations we have are priceless.


Artists and Cartoonists like WilliamHeath Robinson and Bill “Calvin & Hobbes” Watterson.
Who would you most like to collaborate with?
Chris Mould. In fact, we have a  few ideas that we’re thrashing around.
What’s your favourite biscuit?
Jaffa Cakes and Garabaldi biscuits. 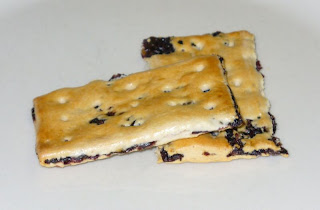 Best Christmas present you ever received?
It has to be the latest Action man, circa 1975 (“with realistic hair and real gripping hands!”). Sigh…happy days.
BRAVO David you survived the cannon unscathed and we shall celebrate with another Garibaldi biscuit!
I have on a few occassions been lucky enough to see Davids artwork in real life and let me tell you, the craftsman ship in his work is quite simply something else! 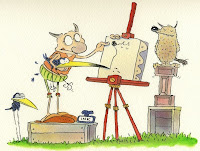 The intricate pen work, the characterisation and life in the pictures and the vivid yet translucent colour pallet is a sight to behold.
If you haven't already I simply must advise you to get your mitts on a copy of David's fabulous creation Hugless Douglas published by Hodder Children's Books , and the sequal Don't Worry Douglas which is the simply sublime tale of a gently unravelling wolly hat! 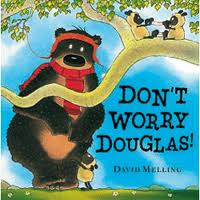 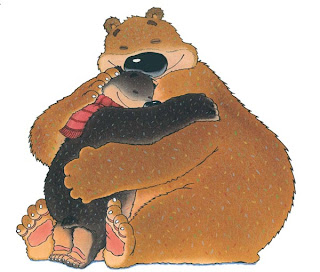 Thank you ever so much for popping by Mr David "the hugger" Melling, you are a squire and a gentleman and we simply can't wait to read The Totally Terrifying Three, keep us posted !!!
Toodle Pip
Images (c) David Melling - books published by Hodder Children's Books
Posted by Pure Pirate at 10:20