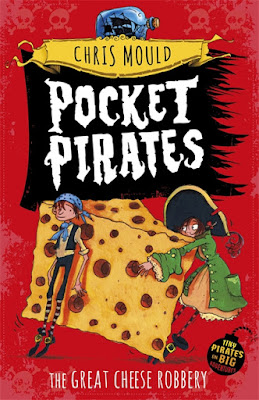 Ahoy M'hearties tis Captain Book Sniffer here! the most famous rum swilling pug pirate to have sailed the seven seas. On my most recent voyage we ran into something very strange indeed. We had set off from the Isle of Dogs off on our way to Sardinia. There we had to drop off a supply of sardines to an awfully nasty, yet awfully rich, group of cats, I digress, 9 days into our journey we spotted a tiny island not found on any of our maps. 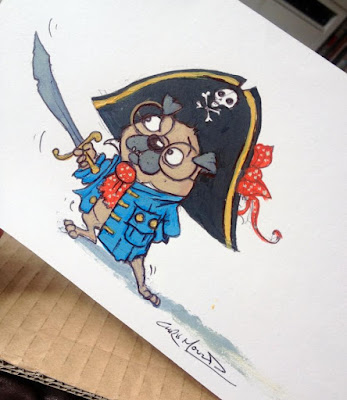 We sailed in to take a closer look. The island was no bigger than a kitchen table. in the distance sat a figure who appeared to be fishing with one hand and drawing with the other. It was right then that I recognised this chap! It was none other than world famous Greenaway Shortlisted Author and Illustrator Chris Mould... Captain Mould and how advantageous we should meet on the very month of publication of his latest illustrated series Pocket Pirates! (Published by Hodder Children's Books) 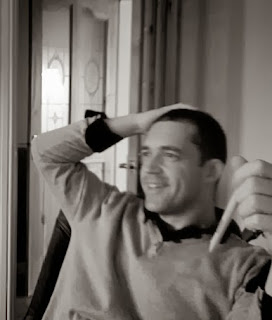 With a dastardly eye on his treasure chest we promptly sailed  to the island and dropped anchor. I threw him a cup attached to a very long piece of string which he held up to his ear. I began to speak into my cup on the other end of the string... or so the tale goes...

Ahoy Captain Mould. Captain BookSniffer here... I have just finished your wonderful pirate adventure book 'Pocket Pirates - The great cheese robbery' How long have you been a fan of pirates?

Ahoy there mi Booksniffing bredrin. Good to hear you've been taking a gander at them there miniature sea faring rascals. Mmmmm I think me and Pirates go back a LONG time. Many years ago I discovered a dusty old copy of Treasure Island and fell in love with the idea of rogues and rascals and treasure seeking business and I haven't been able to shake it off since.

A very wise path to take Sir. I noticed that these pirates are very small... smaller than I! Why did you choose to make them so tiny (yet mighty)?

Well it was an idea that was a cross contamination of influences and inspiration. I used to LOVE The Borrowers and Old Mrs Pepperpot when I was little. The idea of tiny people was, and still is, universally appealing. I'd been re-reading The Borrowers and came across a ship in a bottle when I was on holiday at the same time and  I thought 'Aha yes, tiny pirates would live in there.' and so it began ... 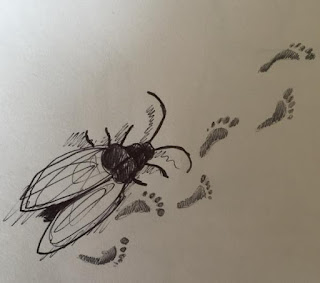 That is brilliant. I do love seeing the tiny pirates in the wonderful pictures found in this book. Is it true you write and illustrated this title?

Thank you. Yes, first and foremost I'm an illustrator. And writing is something that came to me out of the creative process. I wouldn't call myself a writer as such but it allows me to create my own world and I'm happy there among the pirates and giant spiders and things of the night. It beats growing up any day of the week.

I hope you were paid two gold pieces for this!?

Ah times have changed. Cheese is the currency of the mini buccaneer. A good lump of Gorgonzola or Gruyere is worth a million doubloons. Such is the nature of the tiny world they inhabit. 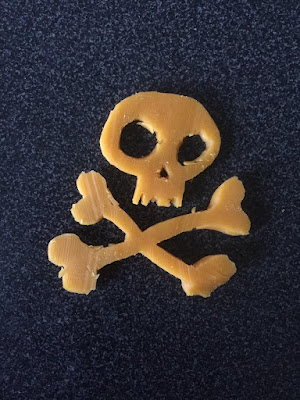 Time for a joke I heard from my last voyage... What is a pirate’s favourite subject at pirate school?

Fire away with the joke cannon, a pirates favourite subject at school is ...?

Arrrr I like the cut of yer jib there, first mate. Now tell me what did the pirate say when he got his leg stuck in the freezer?

Shiver me timbers!  Oh I meant to say 'wooden leg'. Aha
I think I just about saved that one from sinking! 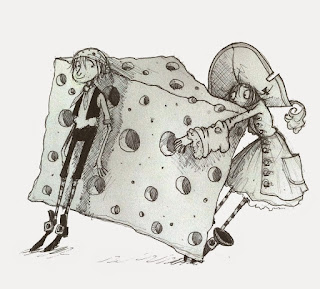 JUST! You almost had to walk the plank. I couldn't help but notice that the pocket pirates have a ships cat. I’m not a huge fan of cats... their fur balls get caught up in the cannons and ships rigging. Would you ever think about maybe swapping the cat for a ... pug?

Well no offence to yer muttliness there mi old chum but we'd be lost without a ship's cat. He's essential to life on a ship. There's no one lazes around in an old hammock as well as a cat. Not even a pooch.

Very true! Do you have a favourite member of the pocket pirate crew?

I think that would have to be Old Uncle Noggin. He's always got a daft story to tell, he's full of 'not very' funny comments and he's constantly eating. Actually I've just realised , I think he's me ! 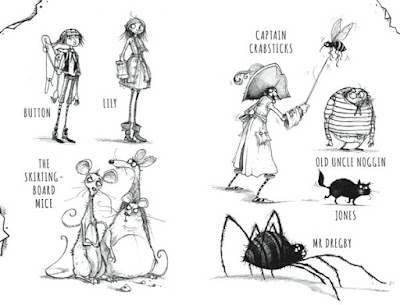 Will there be more adventures from the pocket pirate crew... a second book perhaps? My crew would love that!

Aye, t'is the first of four I'm happy to say.

Four! Hazar! That is great news! We shall keep our eyes on the horizon for those new adventures!
I hear our ships cook calling... apparently our dinner is ready. Pedigree Squid tonight. Yum yum. He is a fantastic cook. A sausage dog by the name of Long John from Lands’ End.
Thank you very much Captain Mould for your time. I shall get the ships cabin puppy to type this all up and send it to shore.
Just one more thing... What did the pirate buy from the Apple Store?

I don't know what did the pirate buy from the Apple Store?

Arrrr yer a top crew member with those old chap. Why does it take pirates so long to learn the alphabet?  Because they spend all their time at C.

Arrrrr.... top joke. Farwell Captain Mould and may you continue to spread the good word of us pirates far and wide for many more tides!

We quickly pulled up anchor and continued our journey towards those filthy cats in Sardinia. It was fantastic to catch up with Captain Mould. Such a jolly fellow.
I wonder if he wanted a lift? 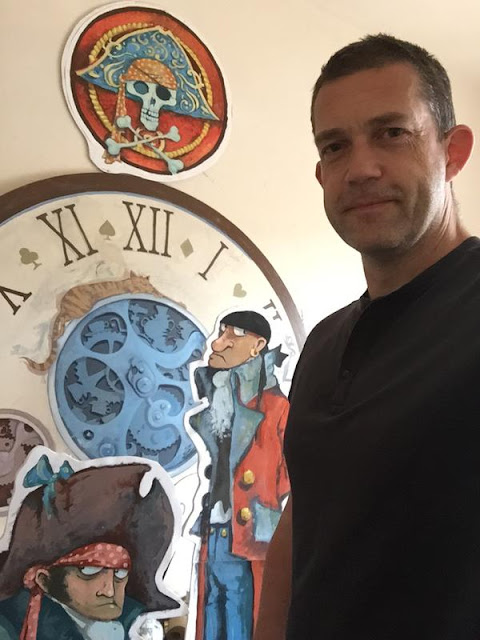 Here are some stunning snippets from Chris Mould's Pocket Pirates sketch book... Inspaaaarghrational, a true master of pen and ink. 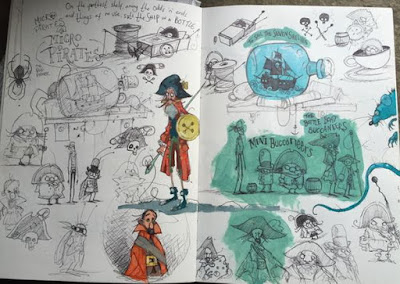 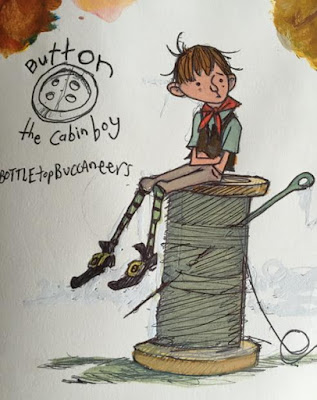 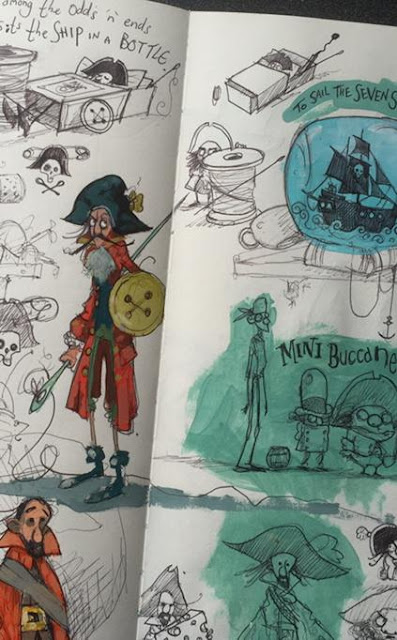 With HUGE thanks and imaginary doubloons to star guest interviewer Danny Pearson King of the High Seas who has done a sterling job and made this marvellous interview happen - Follow him on Twitter here! 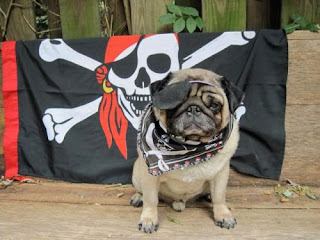