We are OVER THE MOON to be able to welcome fantabulous illustrator extrodinaire and star of the show  Helen Hancocks to the Book Sniffer blog today as we em'bark' on a week long summer blog tour with some of our very favourite blog buddies.

As Helen's latest picture book masterpiece
'William Heads to Hollywood' hits the bright lights of the high street book store we are thrilled to be able to share with you an exclusive insight into how this book was created, Helens inspirations and a little bit about the elusive REAL William!
What a treat. Slap on some lippy and a feather boa, we are about to set off towards the hollywood hills! BUCKLE UP! 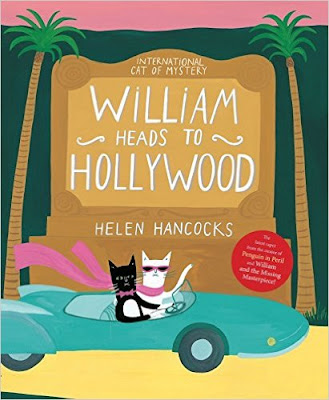 William is very excited to be on the Booksniffer blog, not just because he wants to swap tips on cravats and bow ties, but also show you behind the scenes of his second book -  William Heads to Hollywood. 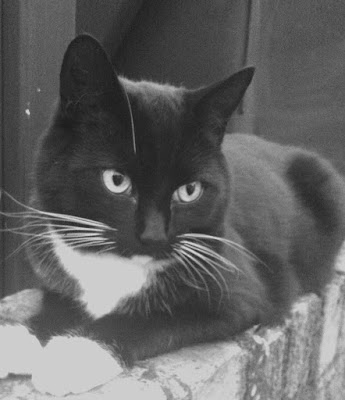 The story was partially inspired by this set of photos from LIFE magazine of lots of black cats queuing to audition for a film. William was very taken with the photos, he thinks he has the perfect airs and graces of any old classic movie star so it seemed the perfect setting for book two. Although I did have the idea for William hitting Hollywood long before Missing Masterpiece hit the printing press, it just took awhile to get the idea down.

It went through a lot of changes to get to the book you see today. Some of the ideas I had didn’t work out but I may use them in something else in the future, who knows.
I watch a lot of films (if you are interested I write a monthly post on my blog about what I have seen each month)  But here are a few films I watched that stood out in helping inform some aspects of the book. 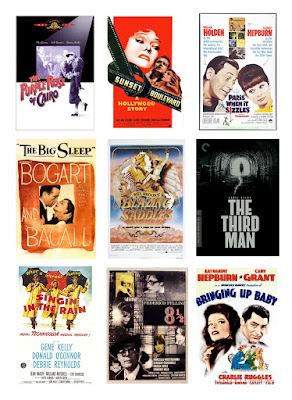 The Purple Rose Of Cairo, Sunset Boulevard, Paris When It Sizzles, The Big Sleep, Blazing Saddles, The Third Man, Singin in The Rain, 8 1/2, Bringing Up Baby. 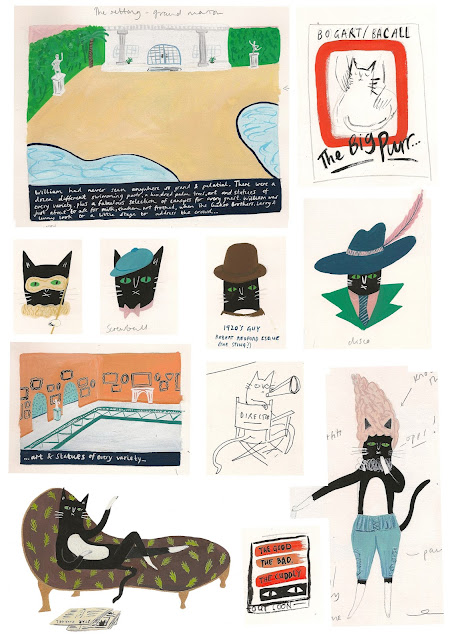 This photo of the Disney Canteen and the MGM lion were also pinned up on my wall whilst working on the book. 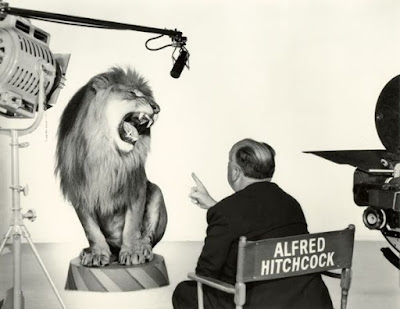 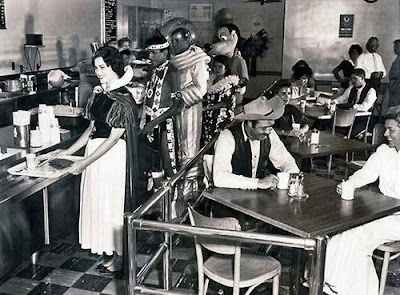 One scene/page of the book I had thought about including from day one was the party scene, after watching Paris when it sizzles I had a bit of an obsession of fitting a party scene in to some art work some how 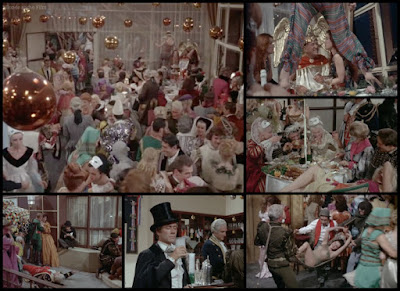 It was an excuse to go a bit crazy with costumes and things. William especially liked the idea too - he was very keen on mingling with the stars. Below is a few photos, from a very small initial thumbnail through to the painting of the party scene. So many fun things to spot in this page too. You may notice the Hollywood sign in these photos - but you may wonder why it isn’t in the book - well what I didn’t know and only found out once I had sent off the art work was the sign is copyrighted! Who would have thought?! 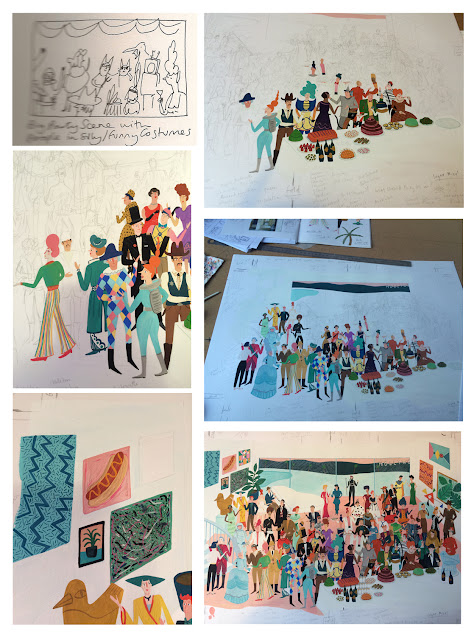 Although this is one of my favourite spreads it is also the one that caused the most anguish in creating it - so much detail (my own fault) and a tight deadline, equaled  a random shakey hand and many tears. But I think it was worth it. I am just a little sad that the perfect Jelly I drew ended up in the page fold - I was so annoyed when I discovered that would happen. That and the fact i forgot to paint on Williams whiskers! shh don’t tell anyone. 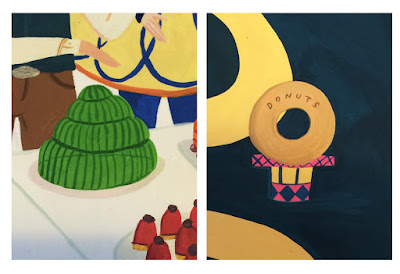 The Hockney documentary came out just before I started painting up the art work, I think his use of colour rubbed of on me and helped to inspire the California feel.

I always try and keep a sheet of paper to try out the colours before committing them to work, its like an extra bit of work. I also wipe my brushes on rags/kitchen roll and found they create nice textures too. 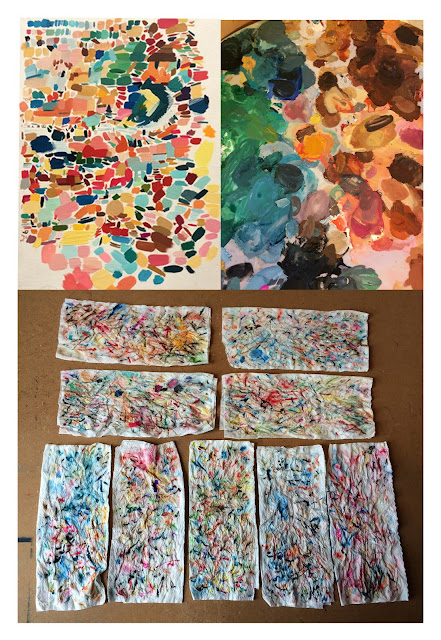 Most of the time I never mix up enough for the big areas! But I do like the texture, tone and brush marks this can lead to. I use gouache paint and I think it has a mind of its own - i haven’t quite worked out if I am using it properly. oh well, sometimes the best bits are the result of happy mistakes. 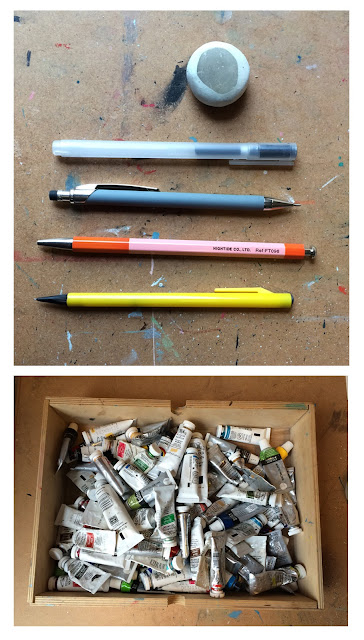 I also use pencils to map out the page, i have just got in to using mechanical pencils, they are very pleasing to use. Also a rubber to rub everything out when it all goes wrong - it always means theres a lot of eraser lint to vacuum up afterwards. 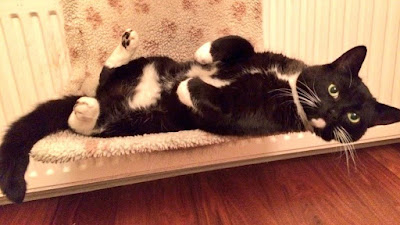 I hope you all enjoy Williams latest adventure, he is off to have some prawns and a cat nap - its hard work being an international cat of mystery!
In the mean time I thought I would leave you with a picture of what I am currently working on.... 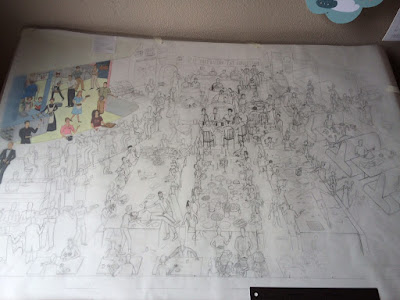 Don't forget to stop by and check out the other stops on the tour which are listed in the banner on the right hand side of this page!

Buy a copy of 'William Heads to Hollywood' HERE

THANK YOU Templar Publishing for organising this.


HUGE thanks to Helen Hancocks (and William)
for taking part. FOLLOW HELEN ON TWITTER @helenhancocks
Posted by Pure Pirate at 01:30