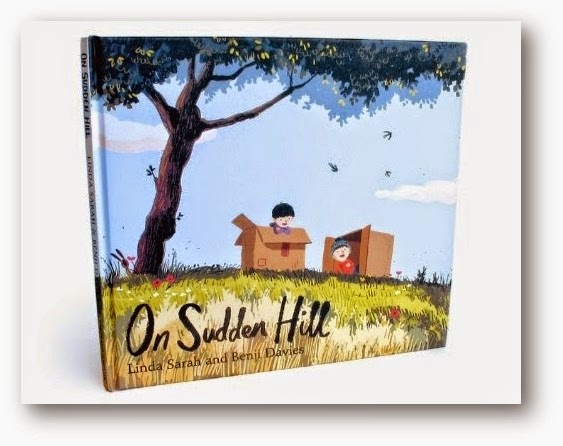 Ethereal and nostalgic in 'box' loads Benji and Sarah have created a magical environment set to ignite imaginations big and small...

On Sudden Hill is 'Stand By Me' for pre-schoolers, filled with emotion and stark scenery the reader is magnetically drawn to the three small boys and the intricacies of their beguiling friendship. The poetic lyrical text weaves a tender tale of innocence and explores the limitless nature of a child's imagination.

We are beyond thrilled to welcome the creators of
On Sudden Hill to Book Sniffer Towers to tell us a little more about the creation and development of the lead characters in this book, how they came to be and how Benji so deftly put a face to their names.

Hello Book Sniffer (I love your blog name by the way), thank you for having me here!

The names for the boys just tumbled out with the story - when that happens, I love it and usually they feel right - like the characters have been there all along, just waiting for the right moment to appear and say: Howdy - I've got something to tell you!

It was originally written as a story for older readers, the boys were young teenagers - a much fiercer story, but when sifting through my chaotic piles of notebooks with ideas and story fragments, I thought it could maybe work for younger people as well - the idea of feeling left out, but also having nowhere to express those feelings, no one who is interested etc., - and re-writing it seemed simple and easy, which is a good sign I think. 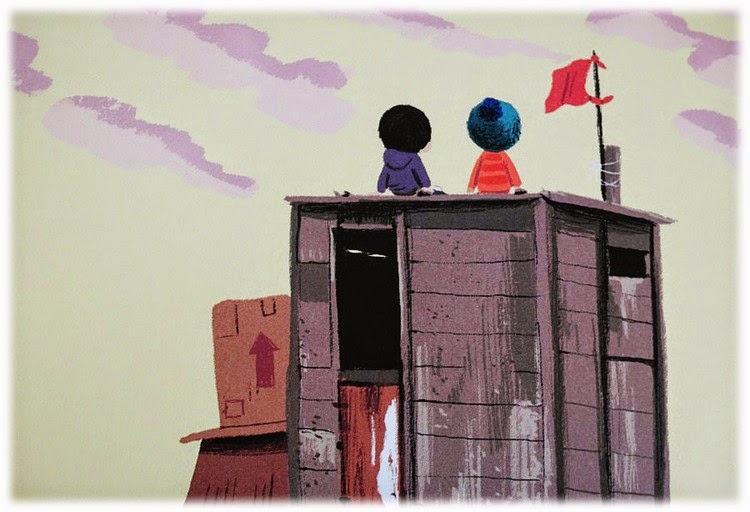 I honestly can't remember how I first pictured Birt, Etho and Shu, but when I started to see Benji's sketches of them, I had a huge feeling of "Yes!" and I adore how he has brought them to life - they are totally as they should be (and so much better!). Their feelings, evoked by his tender expressions, gestures, reflected in surroundings etc. - just perfect and magical. 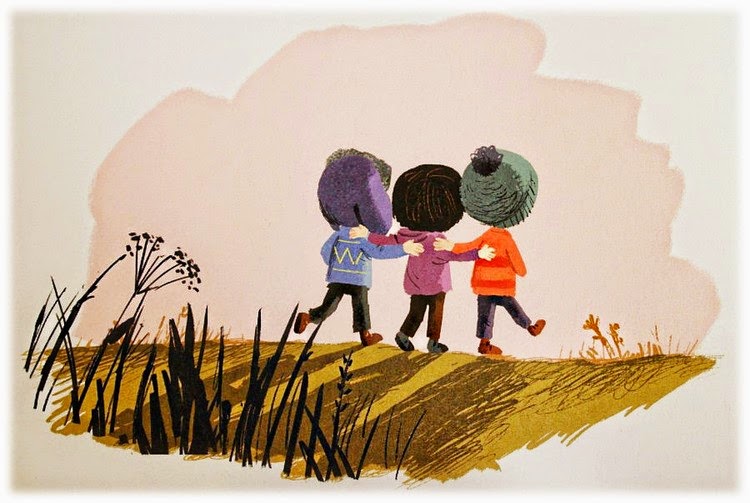 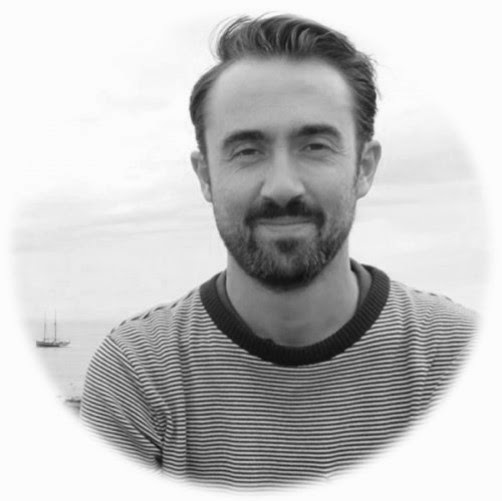 Characters I think are one of the hardest parts of illustrating a book.
The main characters, the starring roles of the book, need to be able to carry the story, to tell the story through their actions. And to do that they need to be believable, they need to hold within them some truth about the story. This all starts in the way that they look.

Of course each illustrator can come up with a vastly different character to the same text, so its by no means set in concrete by the words. That's where as the illustrator you get to tell the story how you see it, you get to shape the characters and the settings, design the place inside which the story unfolds.

First of all you need to know the function of the character, how do they relate to the other characters and elements in the story. In a well written text I think this just pops out at you and perhaps gets easier the more books you illustrate, as you hopefully get better at it.
You have to take their most important characteristics and make them embody those ideas. Are they vulnerable? Make them small. Do they need to be physically big enough to do something specific in the story, to reach on top of a wall perhaps? Make them tall. Or give them long arms. This sounds quite simple but actually can be quite a complex process of unravelling the text to get the right feel for the character. Its a bit like finding a missing piece of jigsaw that fits perfectly in the hole. All these choices have to feel right for the story. Even if they feel random I think there is something subconscious at work, guiding the choices - hair colour, posture, costume. All of these choices will be reflected in the atmosphere and tone of the book.

For On Sudden Hill I felt that it was such an emotional text, that I couldn’t see the characters without visualising their world first. I thought it needed a more organic approach, to see the bigger picture and then start pulling the characters out.

First of all I started to draw silhouettes of some of the scenes in the text, or moments that I felt would evoke the atmosphere of the book. In animation they call these kind of sketches and drawings the ‘beats’. 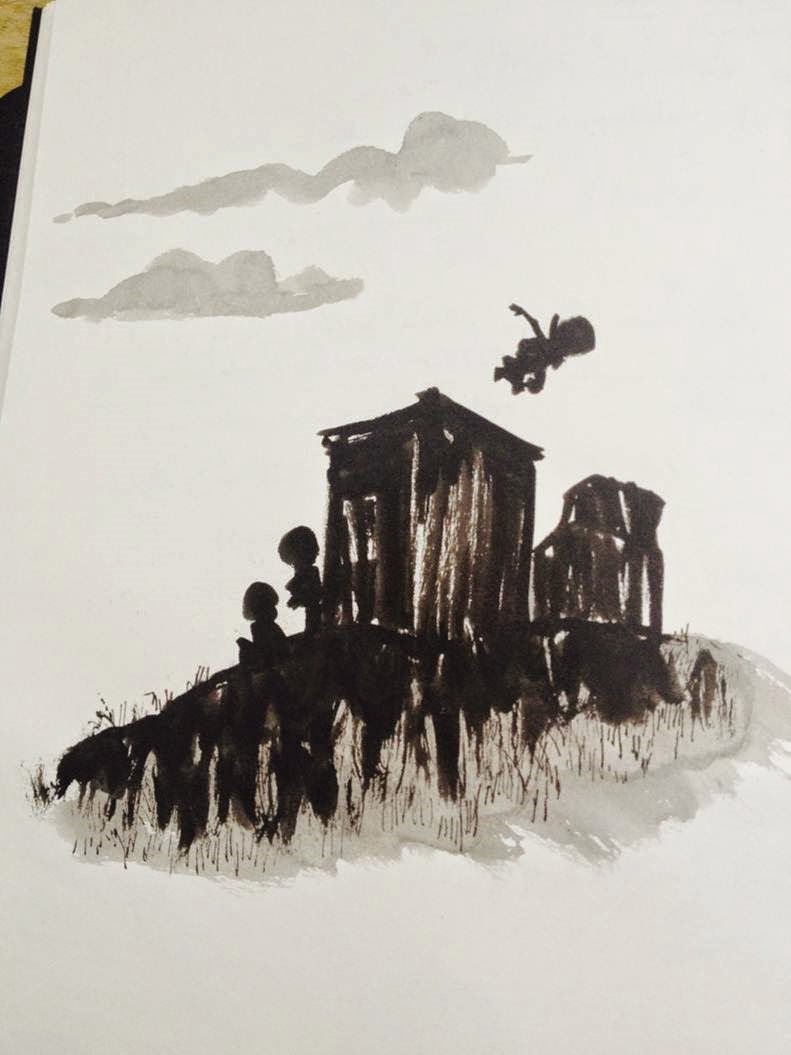 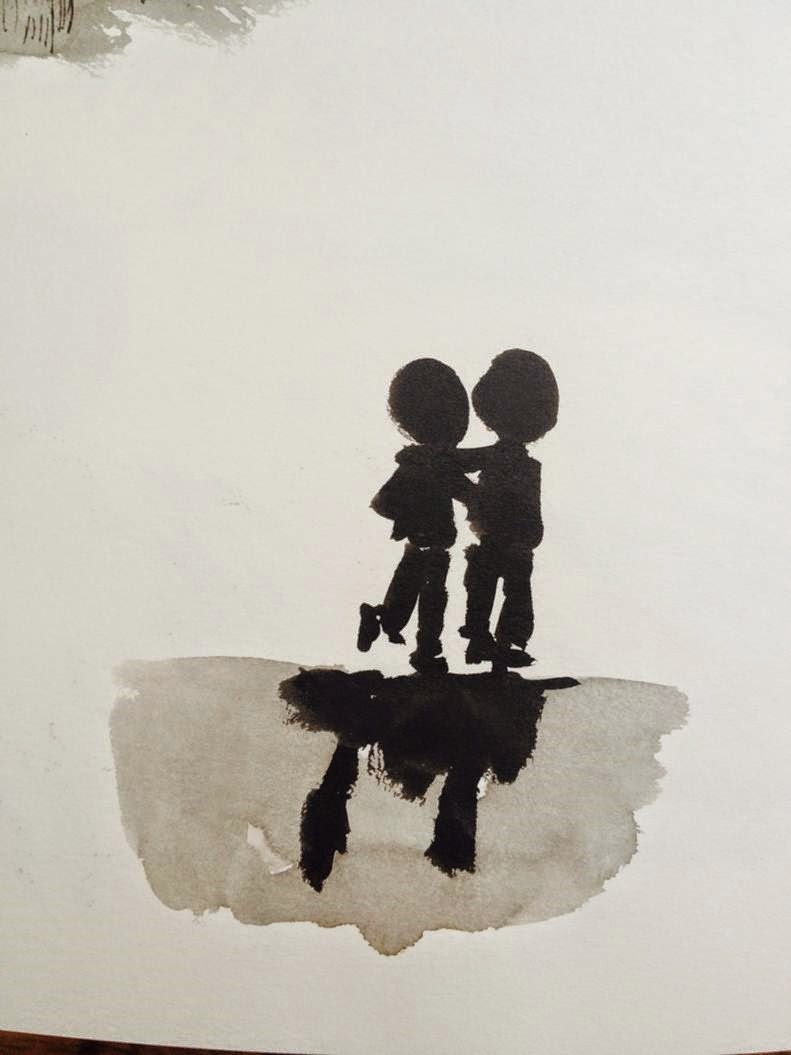 These beats really helped me to start shaping the story, getting into the sense of place and the interaction between the three boys.
I then sort of hoped that their characters would start to filter through. I made more further sketches. 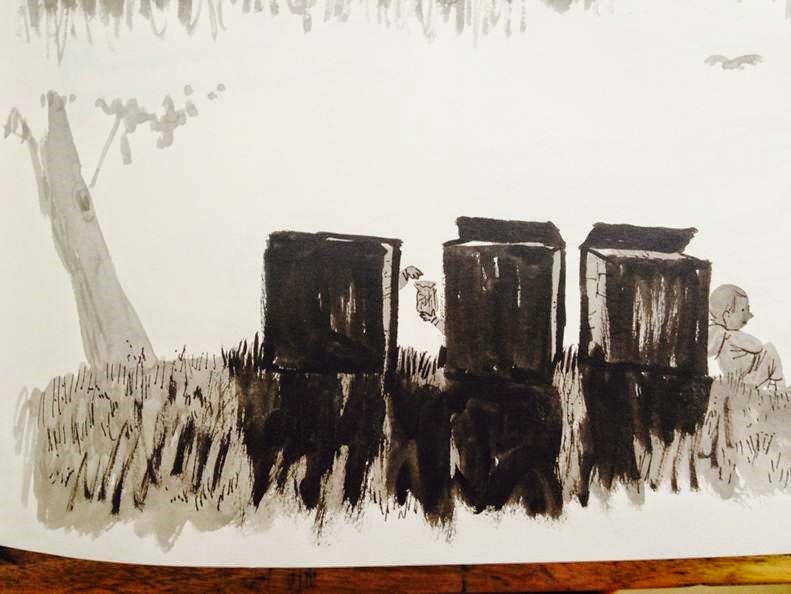 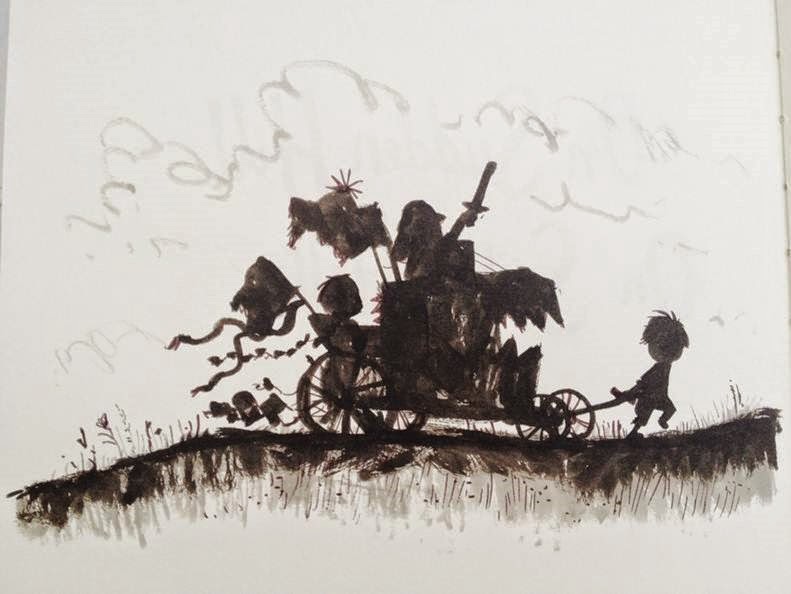 I was starting to get an idea of how a couple of them might look, very roughly. I think some of them were a bit too old looking, but that wasn’t important for this stage. It was better to just get something down than worry about specifics.  I would have loved to have been able to keep more of these silhouettes in the final book but I think it might have been too dark and moody.

Then I made some more detailed character sketches and also a design for the box-cart which I based on my previous silhouette drawings. 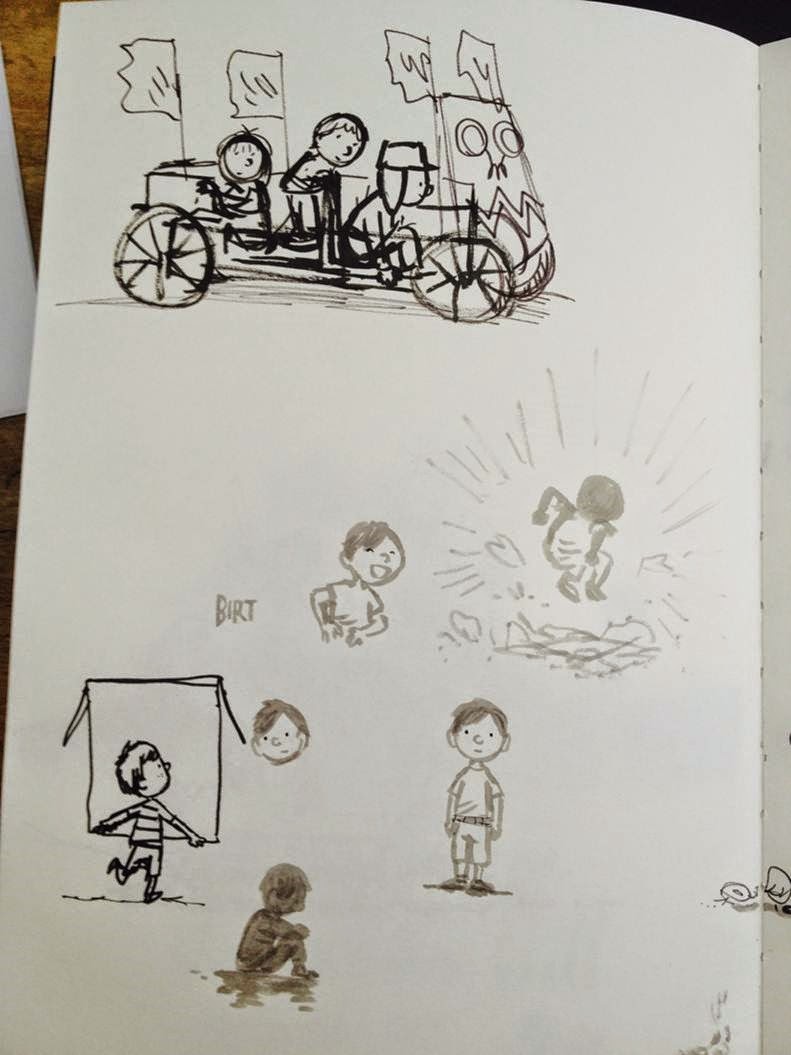 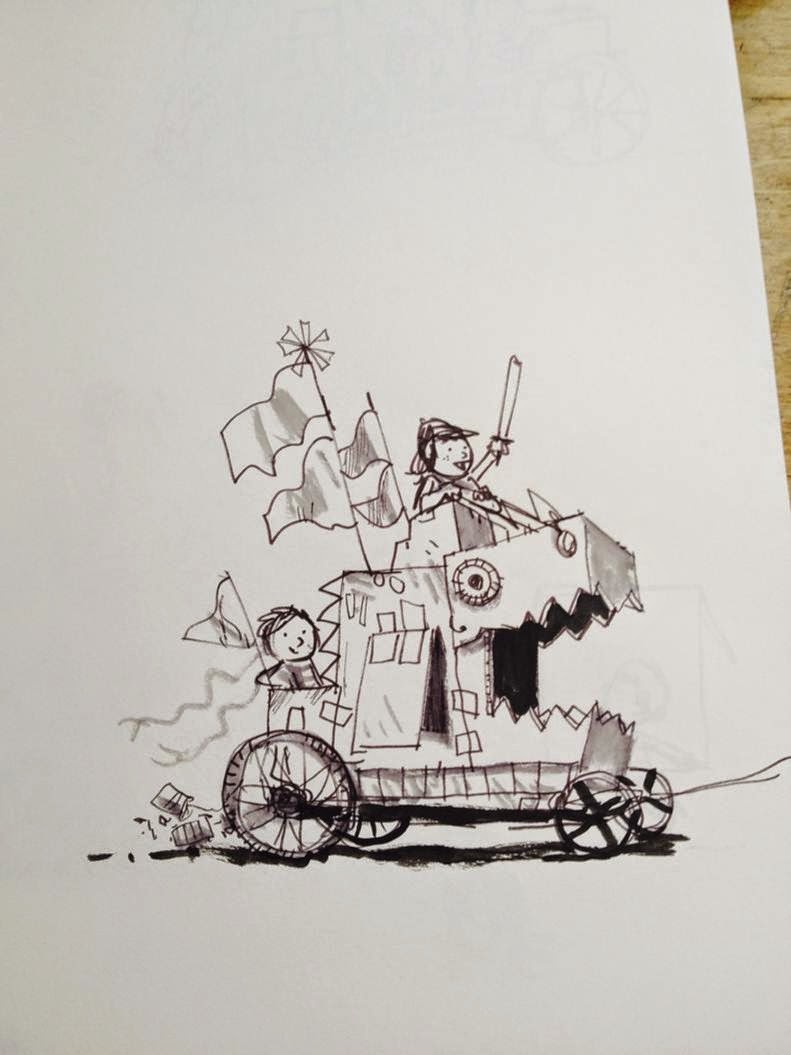 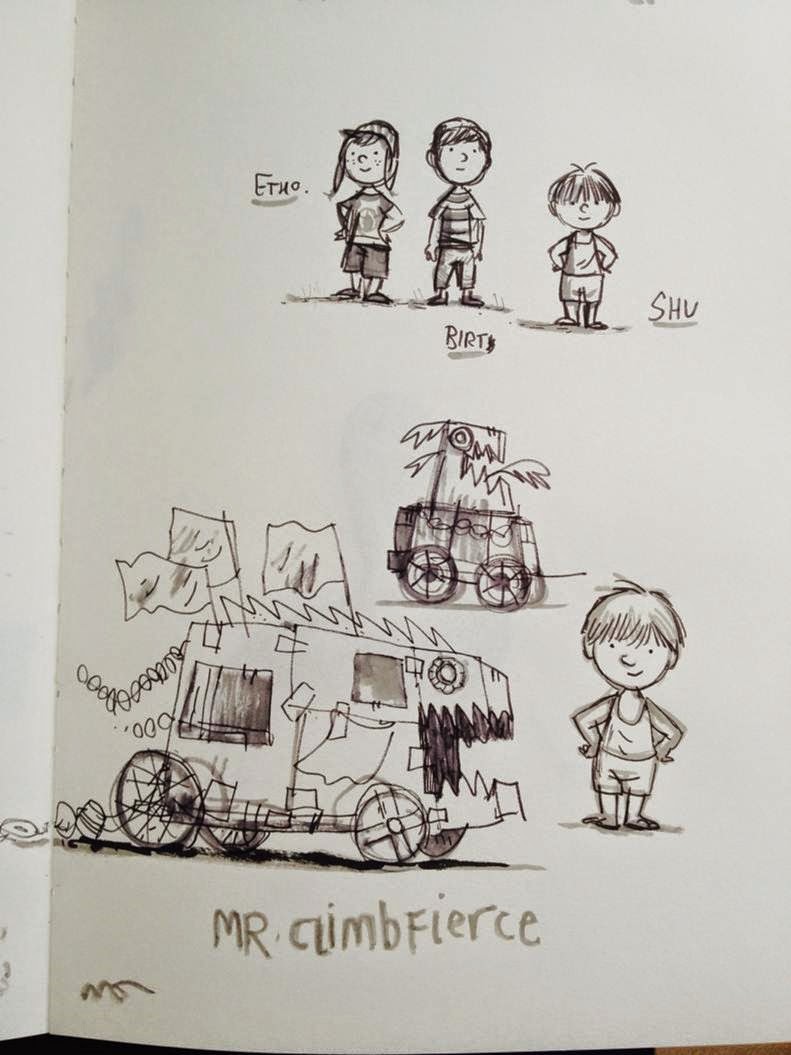 As I started to artwork, their individual personalities started to take shape. They still needed to be younger though, and I gave them more appeal by making their clothes brighter and more detailed.
Then at a late stage, we (my art director, editor and myself) realised that it wasn’t really working as well as it could. One of the characters was stealing the limelight - the wrong one! But rather than start the characters from scratch they suggested a straight swap of two of the characters. So Birt became Shu and Shu, Birt. It was completely contrary to how I had been thinking but the characters worked but it made complete sense.

I think it shows that you can never be entirely sure what the right solution for a character is, but that when you get it right everything falls into place. 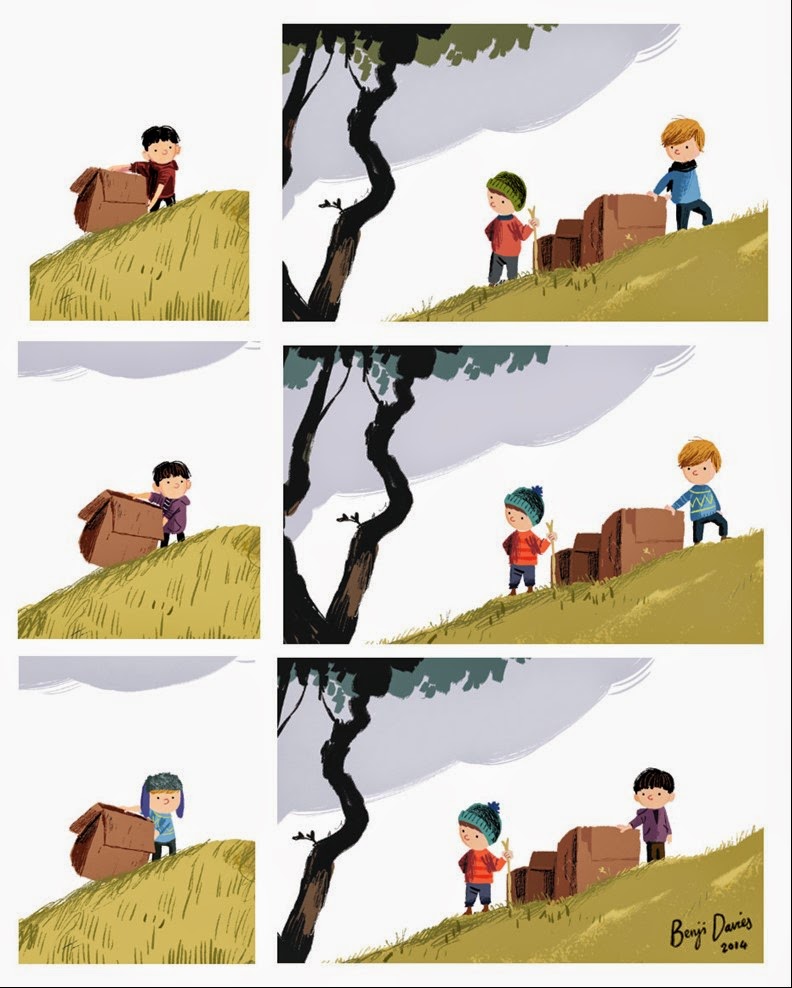 Follow Benji (Benji_Davies)
& Sarah (@travelandsing) on Twitter
With HUGE thanks to the team at Simon and Schuster  (especially Jade)
for inviting us to kick off this blog tour!
Make sure you pop over to Wondrous Reads tomorrow for the next installment of the On Sudden Hill blog tour!