My dog Roo was so impressed with your blog that she has been nagging and nagging to send in her own book review.  She even wanted to do it instead of going for a walk, but I had to insist - exercise first, fun later.  Now we are curled up by the fire and Roo keeps pushing my hands off the keyboard because she wants to talk.  So here she is.... 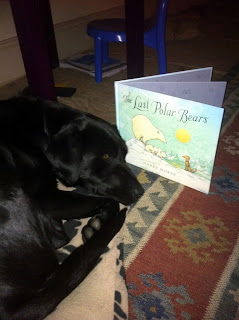 Hey Sniffer.  I love your blog.  Its about time us hounds had a say in these things. I am writing to tell you about my favourite book which is called The Last Polar Bears by Harry Horse.  I like it best because its got a dog in in called Roo, who I think must be named after me, except that the Roo in the story is yellow and not black like me.

So this story is about a dog not unlike myself, who goes with her owner to find the last polar bears.  Roo nags and nags to have a go at steering the boat, then goes round and round in circles.  She says dogs always steer like that.  She's right too.

Anyway, they go to the North Pole with all their stuff loaded into a golf trolley, which Roo has to pull.  She doesn't mind because she says her breed are good on snow.  Better than huskeys probably.  They find a cabin and get snowed in, and wolves walk on the roof and her owner accidentally hits a penguin on the head with a golf ball, but the penguin recovers and Roo is annyoyed because the penguin smells like fish.  Eventually they head off to find the polar bears, but get caught up in a terrible storm and the tent blows away.  Luckily the Roo in the story is nearly as clever as me, as she gets out a tin of macaroni she has been keeping in case of emergencies, and they are both saved.

I won't tell you what happens  at the end because I don't want to spoil it for you.  A clue is that it involves polar bears and ice cream for Roo, so it has a happy ending.

If you have never read this book, you should get your owner to buy it.  The pictures are almost as beautiful as me, but not as tasty as socks or mashed potato.
Posted by Pure Pirate at 04:34