I have a Book Sniffer exclusive just for you, YES an ever-so TOP SECRET peek back stage at Alex T Smiths brand new picture book gem Catch Us If You Can-Can, it's so top secret it doesn't even exist as a real book yet! (don't say I don't sniff out the best treats for you!) publishing on 2nd August (which also coincidentally happens to be Alex's birthday too toot toot)


You may want to sit yourself done in a comfy chair because this a tale of mild peril, stolen gold, large under garments, an Alligator in drag and some fierce dance moves....hold on to your tiaras it's time to hit the dance floor.
Catch Us If You Can-Can stars Sly little minx Foxy DuBois , who you may well remember from Alex's book Egg, 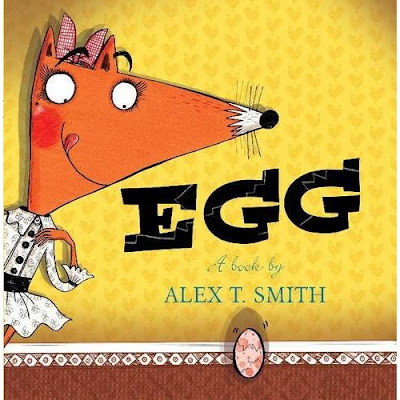 The state if the economy has finally infiltrated the world of the picture book and Foxy has hit hard times , there's nothing in her piggy bank but a paper clip and a bit of miserable fluff.
Foxy dons her high fashion mac and hits the streets in search of a solution, her beady eyes are drawn to a brash street side poster advertising a glitterballtastic birds ONLY dance competition with a fabulous golden prize.
Foxy knows she ain't no Darcey Bussel and on her own would have no chance of winning such a wondrous prize but she has a plan in mind.
Enter stage right Alphonso the Alligator, Foxy's arch twinkle toed nemesis, with a dubious dastardly moustache.
Faster than lightening Alphonso and Foxy hot foot it to the fancy dress store to find some cunning disguises.

The big day arrives and the pair look a vision in their sequins and tutus, the Barry Manilow of the penguin world tinkles to old ivories and Foxy and Al dance their little hearts out. 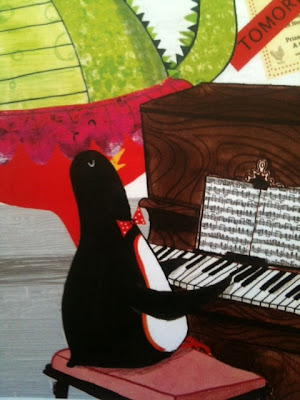 By all accounts things are looking promising and the judges are looking VERY impressed that is until Al busts one almighty high kick instantly derobing the pair and revealing their true un-birdy identities.

Chaos ensues as Foxy and Alphonso grab the golden prize and make a dash for it amidst the kerfuffle ... They are pursued most ferociously by the judges in a heart stopping car chase climaxing with a cliff top dive!!!!! Worry not Foxy has a plan and it involves big knickers! Will Foxy and Al head into the sunset with their ill gotten gains? You'll have to read and find out....
Catch us if you Can-Can is an action-packed sequin encrusted gem which would have the strictly come dancing judges clamouring for more and flailing their number 10 cards above their heads. A hilarious pair worthy of a sell out Broadway tour - bravo Foxy and Alphonso and BRAVO Encore Alex.
You simply MUST follow Alex on Twitter for many many hours of hilarity and sunshiney wonderment @Alex_T_Smith
Find a complete range of Alex T Smith Books HERE
Posted by Pure Pirate at 08:49