STUCK in a tree with Oliver Jeffers 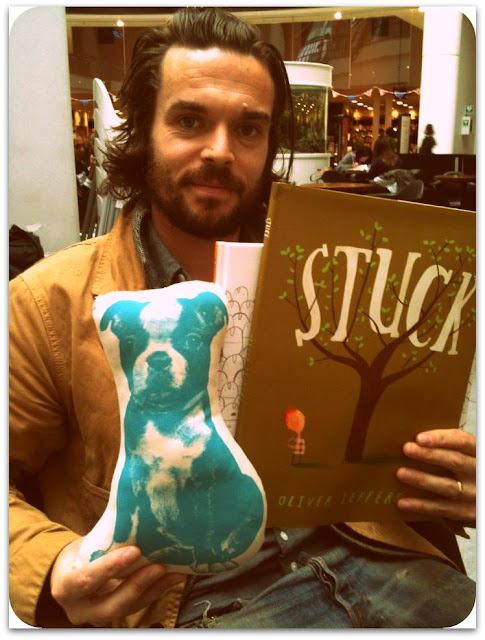 I've been a fan of Oliver's work for many many years now (human years not dog years!) and in a desperate bid to catch up with him while he was visiting the UK I wrote a blog entitled "50 reasons why Oliver Jeffers should appear on the Book Sniffer" - I didn't think in a million GAZILLION years that I would actually get to meet and interview the man himself - but I did.. can you imagine, what a treat and entirely thanks to magical Rosi from Harper Collins to whom I am eternally grateful. 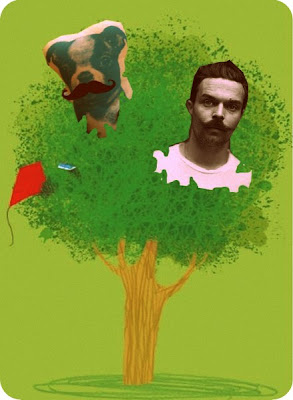 What did you like to draw when you were a kid? What happened to your drawings? Who thought they were cool?

"A lot of large waves, whales, boats, things sinking, things being destroyed, giants stomping on houses, errum a lot of very aggressive stuff there, nobody kept them, none of my early drawings are still around.
I bumped into my P3 teacher at a signing she had no idea that I'd started up this career and until about ten years ago she kept my story book jotter from homework as an example to other students for about 20 years and about ten years ago she lost it when they were moving school, it was a real shame as I would love to have seen it. My wife found hers recently and it was hilarious." 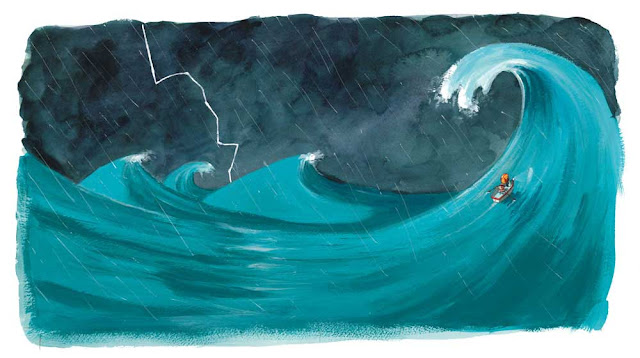 If you had to eat a book which one would you choose and why?

"The Dictionary, it's got ALL the words.."

Do you think you have found the balance between personal and commercial work?
"Yes and no, I'd rather ALL my work was personal work but I also have to pay the rent, I suppose I've found a balance"
Where do you get your fabulous hats? (It hasn't slipped my notice that he does have a rather fantastic and envysome collection of wonderful head wear)
"All over the place really, the one I wear most these days I got when I was in Bologna for the first time at the book fair, it's Borselini an Italian hat, there's a great hat shop in New York called J.J Hatter - I love a good Milliner" 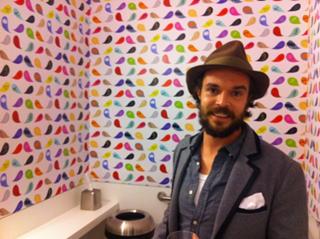 Would you mind being called Oliver Jeffer cakes?

"They used to mock me at school and call me Jaffer Cakes, It wouldn't bother me now but I'd prefer not to be"

Which three items would you like someone to throw at you if you were stuck up a tree?

What convinced you to produce artwork for the chocolate ad?


"Needing to pay my rent convinced me to do it and it's Kinder. I've always loved Kinder chocolate, I did actually get lots of free chocolate which made me very popular on my street. They've sent me another box for when I get home... well it should be there, or else lots of people are in trouble. 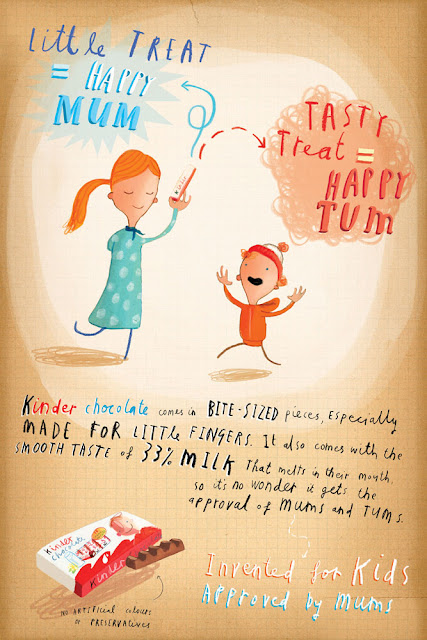 Did you ever find out who wrote you the mystery letter from the Isle of Wight?

Do you prefer traditional media or digital ?(given your travelling kit see below) 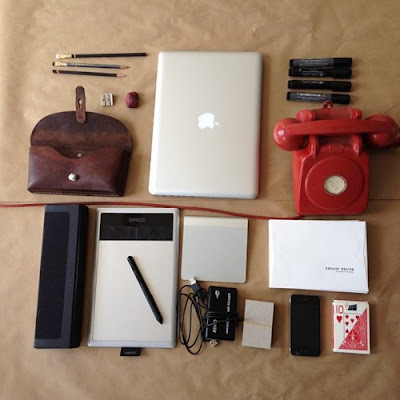 "It depends on what I'm doing, Everything starts traditionally with a pencil and paper. Even if I'm doing something digitally it'll start with things made with my hands on a piece of paper"


Typography plays a big part and goes hand in hand with the Jeffers look. Do you hand letter for all foreign translations?


"NO - That became too complicated..... and I couldn't spell very well"

"I read a few of the Famous Five books as a child and I re-read the edition that I illustrated before I started working on it." 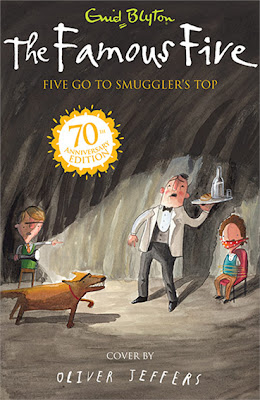 "Children's classic, I would probably pick a Roald Dahl one but the Quentin Blake Illustrations are just so integral to Roald Dahl so I don't know if I'd see myself fit to re-visualise that"

Whose sketch book would you most like to see?
"Quite possibly Tim Burton, Wes Anderson on the filmic side, Julian Opie or Gerard Richter in fine art ... Actually I've got it, Sempé "

Where do you see the future for digital children's books?


"where do I see it? .. On a screen.. :) It's all very haphazard and not really sure of itself. It'll be a new platform emerging -it'll not replace books, like when computer games came along, they didn't replace films and TV did not in actual fact kill the radio star."

Which of your other books would you like to see made into an app?

"None right now, I'm waiting for the market to become more sure of itself, figure itself out."

Can you tell us how you came up with the concept for your new Picture Book The Huey's in: The New Jumper?  and do you have any embarrassing jumpers?

I'm a big fan of bad jumpers, there's actually a website where you can send an illustration and they'll knit it into a jumper for you, not just print it on actually knit it!

There are a few things which helped me come up with the idea of the Huey characters, they basically came about accidentally as I had featured them in my sketchbooks for a while to illustrate boring technical information and topic headings, so they just sort of lived in my sketch books, I liked something that made things that were incredibly boring into something fun, I remember when I was a kid my brother was sitting there with a very serious look on his face thinking about something then he said "what do you think the opposite of a cat is?" I said " erum a dog?" he said "I would have said it was a multi-storey car park". So I had this idea I would do this philosophical opposites book, but rather than just jump in and ask people to buy into this world of the Huey's I came up with the idea of making a boring mundane object such as a jumper exciting. The name Huey came about because my grandfather Tommy has 23 grandchildren and can never remember any of their names so he just calls everybody Huey. 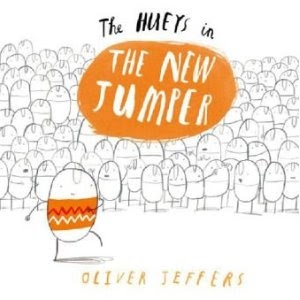 Which of your books are you most proud of?


I'm proud of them all but I guess the one which has particular meaning is The Incredible Book Eating Boy as that was the book which my publishers didn't want to publish, in the end we came up with a deal where I would get to publish the Book Eating Boy and then get the book they wanted afterwards.

How did you come up with the idea for Lost and Found? why is it a penguin and not another animal?


it's actually based on a true story! There's a zoo in Belfast and there's a huge penguin enclosure and a school went there on a trip. A boy got into the enclosure un-noticed and rounded up a baby penguin and took it away, they got back on the school bus. it wasn't til then his parents noticed he had a penguin, and they had to keep it overnight in the bath tub until they could take it back to the zoo and I always thought about what this relationship was like, what did they talk about? did they watch TV together? That one little thing sort of ended up in my sketch book. 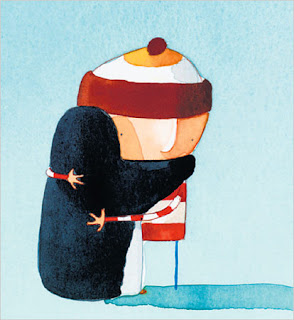 At  this point there is an almighty creak, a lurch and a crack and the branch upon which Oliver and I perch finally crashes to the ground, just in time for Oliver to dash to his event at Waterstones - What a day, what a nice chap.
With all the excitement I almost forgot I was one my way to stock up on Gentleman's Relish at Fortnum's.. Hope they're still open! 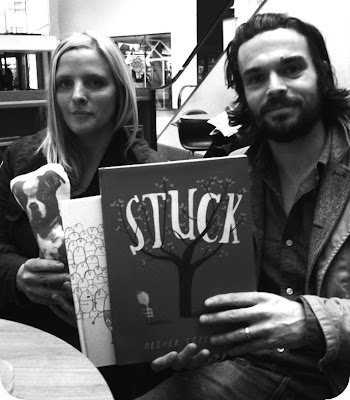 THANK YOU to Oliver for being kind enough to visit our blog and thank you with a cherry on top to Rosi Book Eating Crawley (@BookEating_Girl) who facilitated this interview. 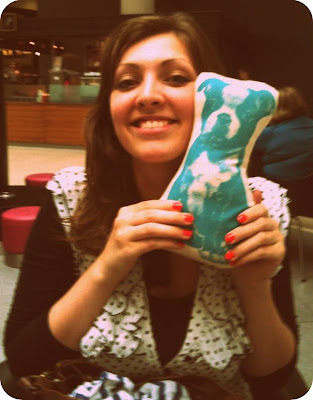 With most gratitudinal thanks to HarperCollins for sending me copies of Oliver's books to drool over and letting me pop along to meet Oliver and to all of you who submitted such probing questions.

Please familiarise yourself with some of these classic Oliver Jeffers gems...