PUN ALERT: Warning this review contains puns so paws for thought before you read any furrther.

So the other day I just happened to be loitering in the offices of Templar Publishing when through a series of cats whispers it transpired that cool cat Adam Stower was going to be in the office that very afternoon talking to the creme de la creme of the Indy book selling industry about his work.

I was aghast, Adam Stower, author and illustrator of Slam! and Silly Doggy in the office that very day, you’ve cat to be kitten me ...right meow? 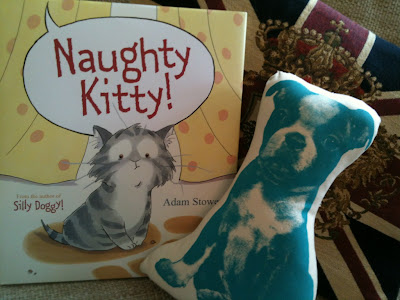 That was a sniffing opportunity not to be missed, So I gate crashed his lunch meeting and had a quick snap taken with him, he was ever so jolly despite having a wretched cold, poor chap AND he gave me a very top secret advance copy of his follow up to one of my all time faves (Silly Doggy) Naughty Kitty.
I must say I have been on tenterhooks waiting to get a sniff of this one, I loved the gentle expressive but utterly hilarious touch of Stower's artwork and this hilarious tail did not fail to amews.

We meet Lily hapless dynamic small person and star of Silly Doggy again, she is utterly charming and wise beyond her years, born for the stage you might say.

To appease Lily's desire to own her very own doggy lily's ever patient mother presents her with the next best thing, a teeny tiny grey kitten (anything cuter I very much doubt you've seen) 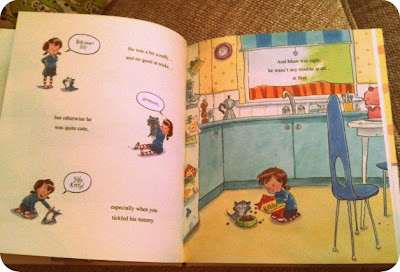 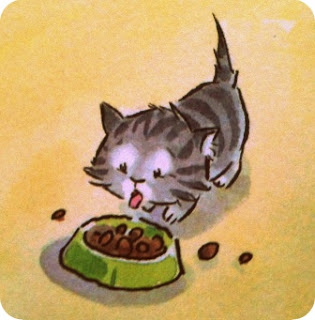 Our story unfolds as we observe Lily getting to grips with the daily chores involved in looking after a small feline, including a catastrophe in the kitchen, a poop on the a rug, a sausage stealing crime, an upset goldfish AND hairs in the bed!

Things run far from smoothly and kitty appears to be hardly house trained at all. Until the reader spots a large mysterious creature lurking in and out of the illustrations causing mayhem and havoc in bucket loads leaving our poor kitty to take the blame. 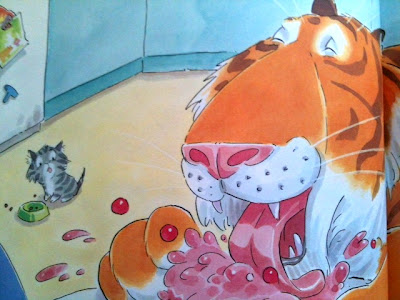 Just as poor Lily reaches the end of her tether there is an "incident" in the garden with a very small but unusually fierce scotty dog called Pat, Kitty saves the day and fends off the ferocious beast (or so Lily thinks) of course there is a large mysterious creature lurking behind them who saves the day furrreal.
Readers will love spotting the subtexts and amusing  news stories hidden within the story and the climatic ending will have us all on the edge of our seats eagerly anticipating book 3! .. My bucks are on an alien invasion! A beautifully design and charming picture book.

Thank you to Templar and Adam Stower - The Book Sniffer salutes you. 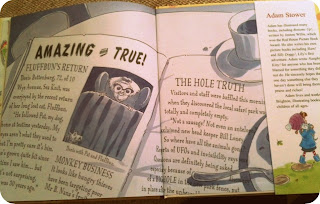 Talk about the cat that got the cream.. or rather the pug! 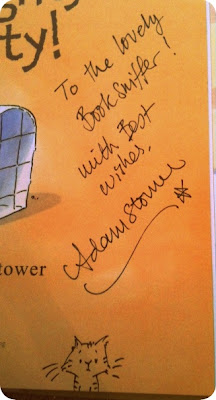